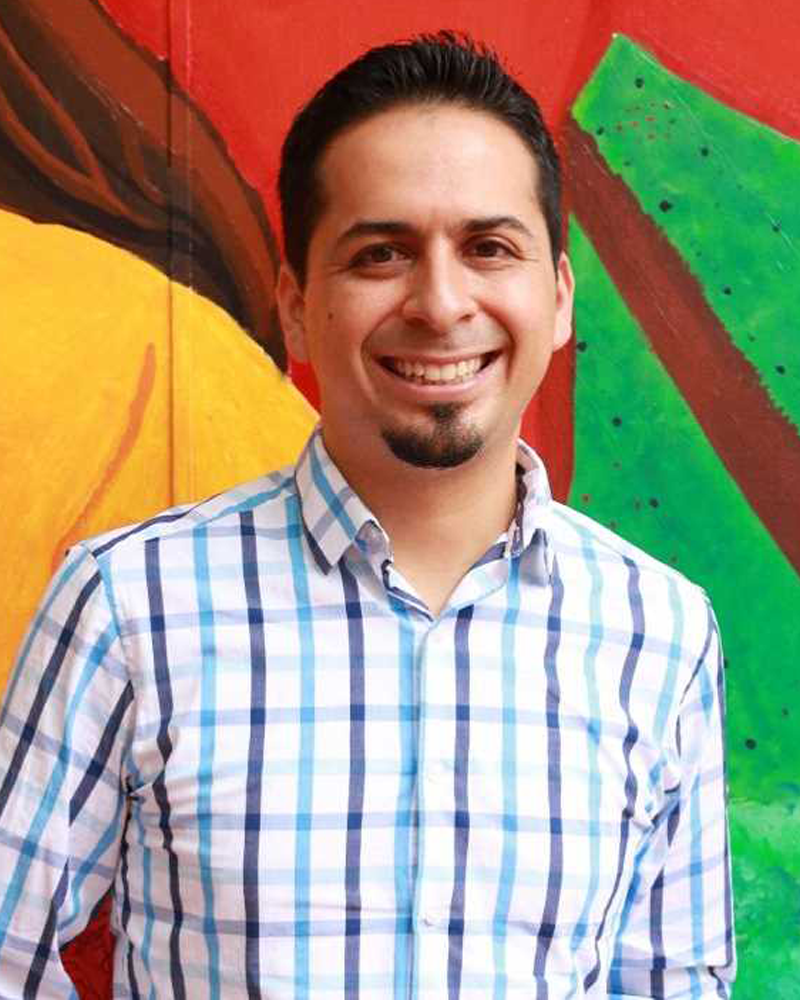 Born in Las Ranas Michoacan, Mexico. In 1990 he immigrated to Salem, Oregon with his family. Jaime worked as a farmworker picking crops for 12 years. In 2005, he began working with Farmworker Housing Development Corporation (FHDC) as a Community Organizer and later became Director of Fund Development. From 2013-2017 Jaime was Secretary-Treasurer for PCUN and the Executive Director of Accion Politica PCUNista (APP), Oregon’s Latino progressive 501c4 organization. In 2011, Jaime was recognized by Shelterforce, the oldest community, economic development magazine in the nation, and selected as one of 6 under 36 young leaders in the country. Jaime serves on several boards including Western Oregon University’s Board of Trustees, Oregon’s Youth Development Council, and the Marion County Children and Families Advisory Commission.

Ines grew up in Newberg, Oregon. Her family migrated from Jalisco, México. She graduated from Linfield College with a B.A. in Sociology. She serves as a member of the executive committee for Unidos Bridging Community. She was recently the first Latina to run for the Newberg School District Board. Ines is passionate about advocating for the rights of those who are underrepresented. 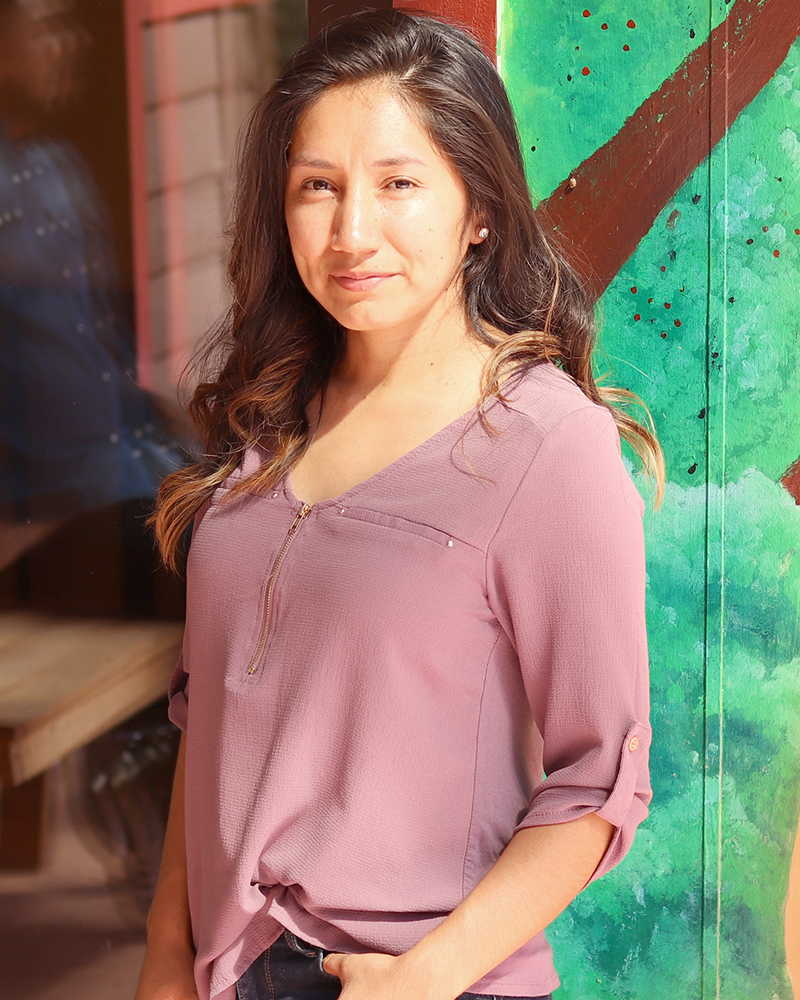 A native of Michoacán, Mexico. She lived with her parents at FHDC’s Nuevo Amanecer farmworker housing project in Woodburn and worked part time at Nuevo Amanecer’s Cipriano Ferrel Education Center in the after-school program starting in 2006. She graduated from Woodburn High School in 2006 and Chemeketa Community College in 2011.

Karina is a proud daughter of immigrants from Hidalgo, Mexico. Raised in Salem, Oregon, she finds herself at home while working alongside an ever-growing and transforming Latinx community. Karina brings together her life and work experience to strengthen community and family relationships. She believes strong relationships encourage and strengthen children and youth, families and communities ability and capacity to raise their voice and innate knowledge to advocate for the dismantling of oppressive systems and the creation of self-sustainable communities. Karina earned her Bachelors of Arts degree at Western Oregon University and her Masters of Social Work at Portland State University. On her free time you will find her hiking with her two children, performing on stage, or quietly sipping tea and reading a book. 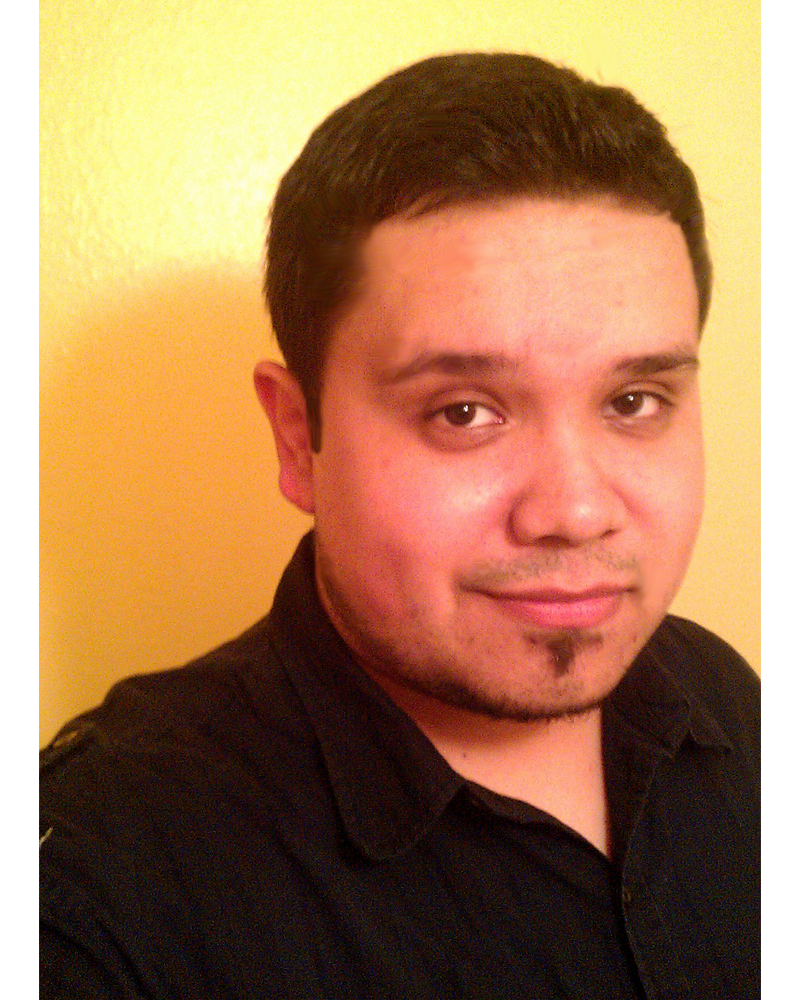 Eduardo grew up in Woodburn, Oregon. He is the oldest of his three siblings, and a proud son of immigrant parents. He is a first generation Chicano student, who graduated Woodburn High School in 2005, and attended Oregon State University with a focus on Marketing and Computer Science. Eduardo has been involved in activist community based programs, and does free-lance multimedia content for websites, musicians and other artists. 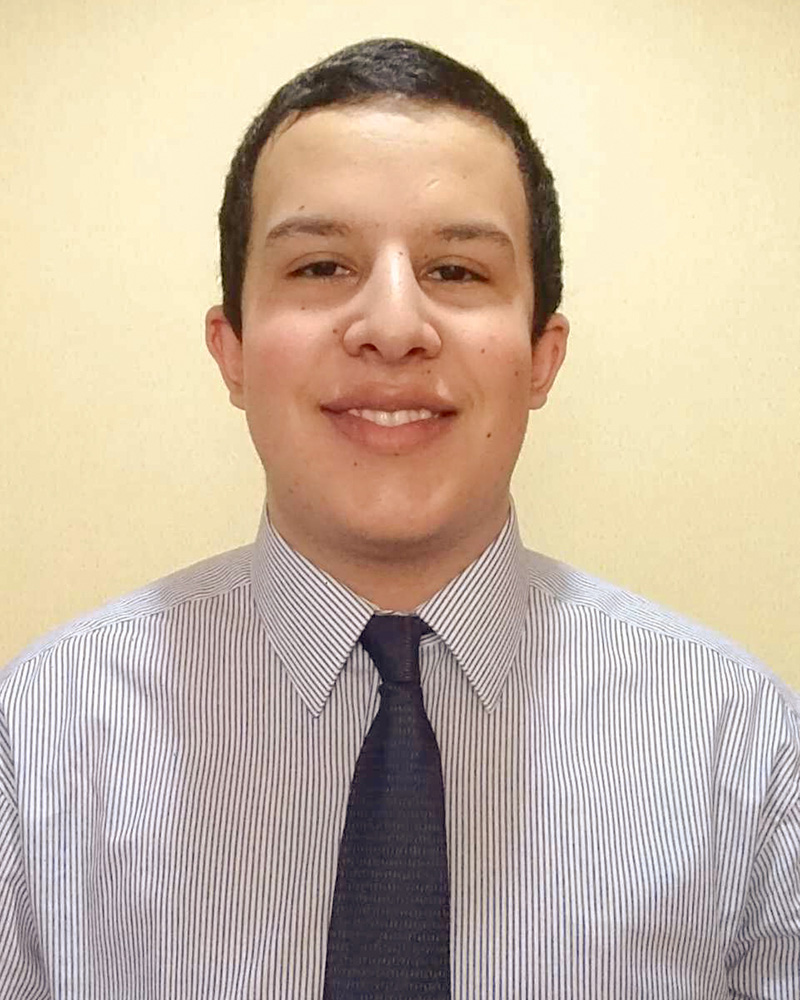 A native of Michoacán, Mexico, Diego is a long-time Salem resident and Willamette University graduate. After college, he went on to earn an M.S.Ed. in Counseling and Mental Health Services from the University of Pennsylvania. He is currently a fourth-year doctoral student in Social-Organizational Psychology at Columbia University. Diego serves as the Alianza Poder Coordinator, working to enhance the wellness and effectiveness of AP organizations and their staff. 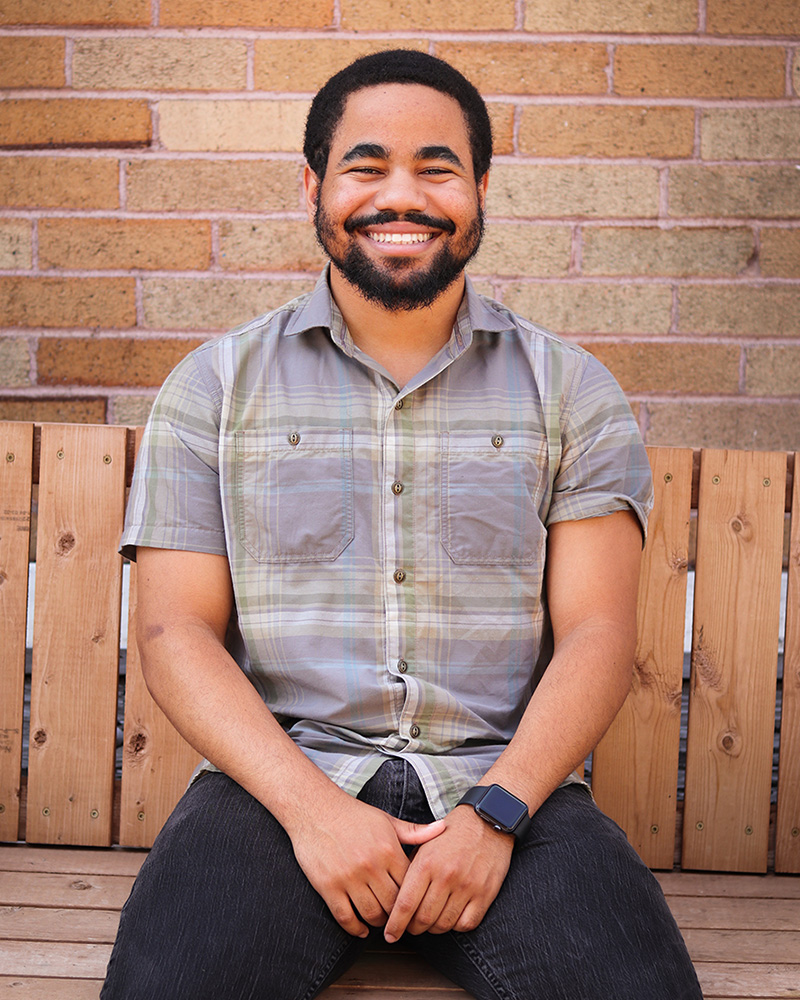 Born to a father in the military, Tremayne has lived in a variety of places around the country. He studied Biostatistics and Public Health at Saint Louis University, and believes in the power of Community Organizing to make impactful social and political change. Serving as the Jesuit Volunteer for Capaces, he hopes to learn from the movement and community in this new role. 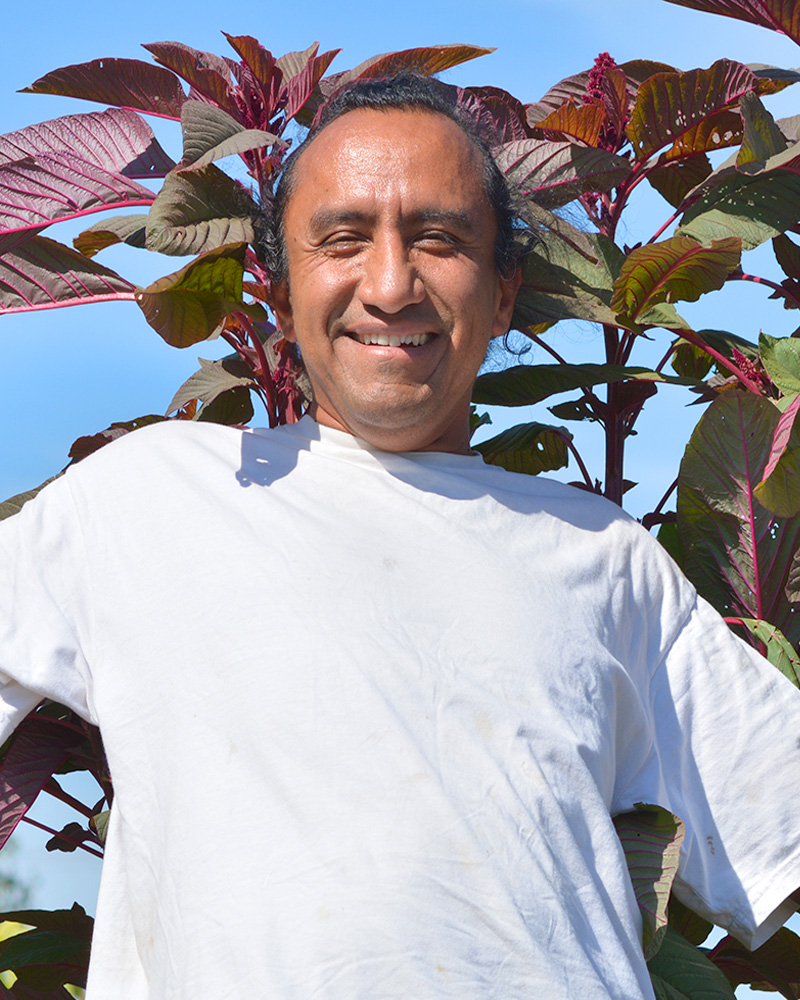 Javier is originally from the state of Guerrero, Mexico and now based in Woodburn, Oregon. In the last 6 years he has focused on growing traditional plants and vegetables in a way that allows us to exercise our ancestral traditions through agriculture. With this in mind, he focuses in unifying our grandfathers/grandmothers’ ancestral knowledge and practices with our youth, to keep our relationship with the land, plants, fungi, and every being that gives us knowledge and allows us to coexist alive. As a hobby, he likes to hike in the mountains, collect plants, roots, and wild mushrooms. Also, he enjoys making string instruments, traditional Native American stone pipes, and traditional cooking. 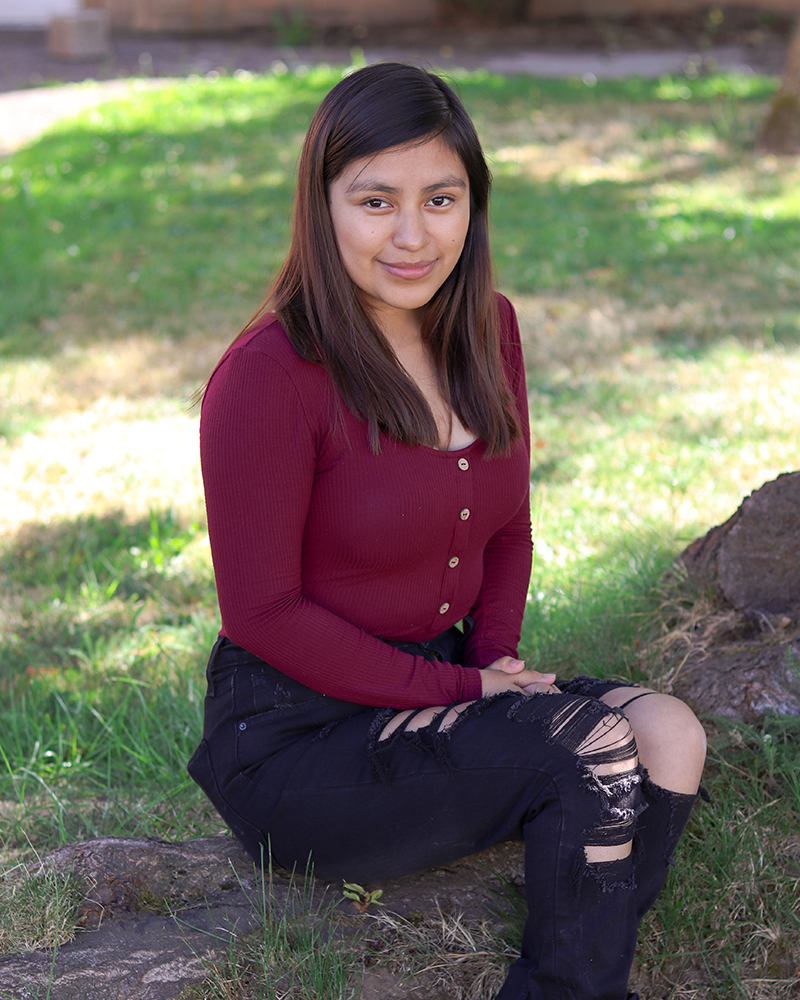 Adabella was born in Cuesta Blanca, Oaxaca, Mexico. At 11 years old she migrated with her family in 2013 to Woodburn, Oregon. Currently, she studies in Woodburn High School in the Academy of International Studies (AIS) and is also a part of the TURNO program. 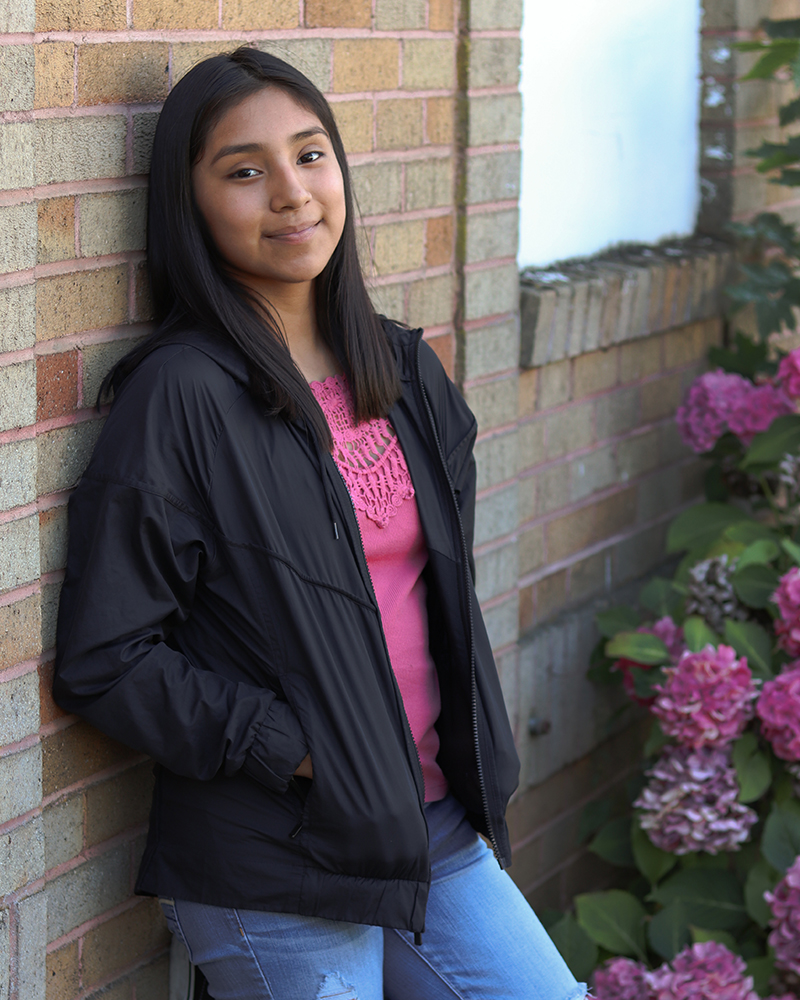 Belinda is the middle child and a proud daughter to migrant parents. She is currently an upcoming Sophomore at the Wellness Business and Sports School (Woodburn High School). Belinda loves getting involved with the community and volunteering. For two years she’s volunteered at the migrant summer program and really enjoys working with the kids there. She’s also part of the program TURNO in hopes to get a lot more involved in her community. 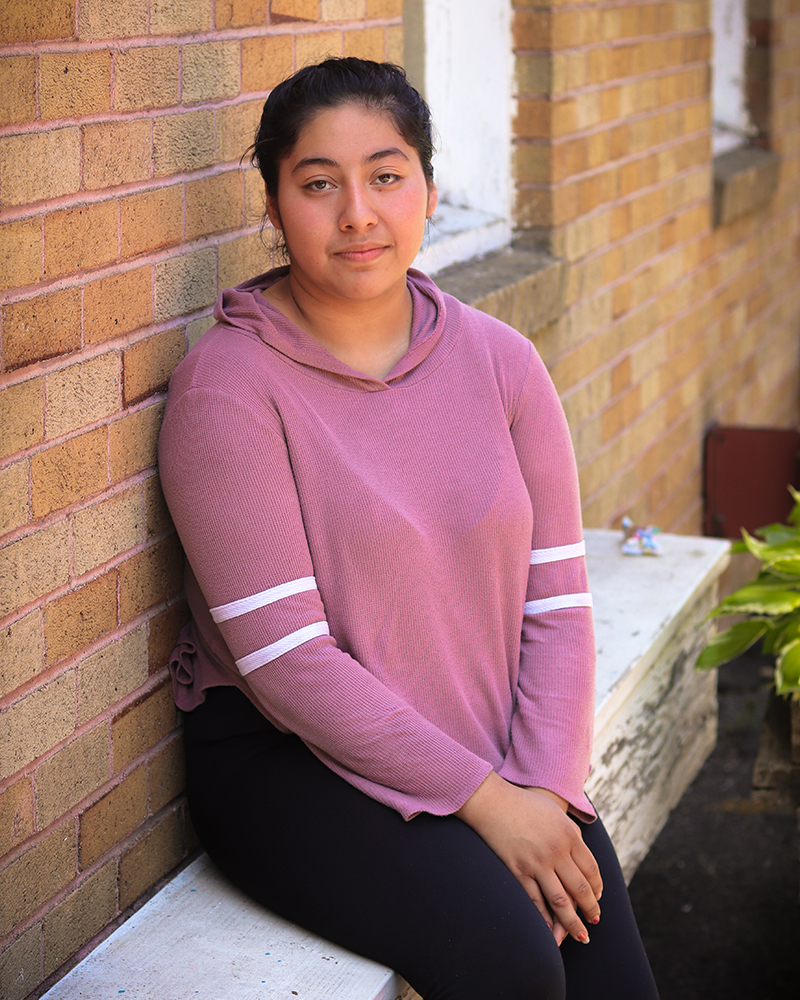 Iris is the oldest of her two siblings. Her parents com from Guatemala and Mexico. She has spent her entire life in Woodburn, Oregon. She currently attends Woodburn High School as part of the Academy of International Studies (AIS). Afterschool, she attends TURNO where she is able to help better her community and learn about the history of Latinos in Oregon. 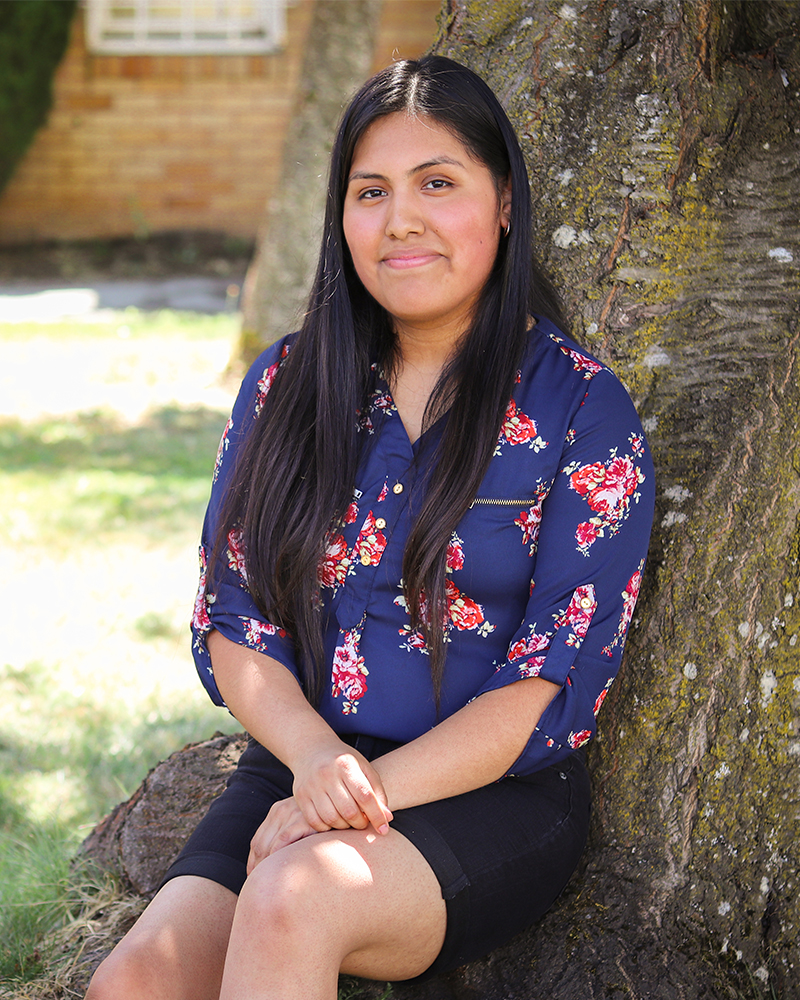 Karina was born and raised in Woodburn Oregon, and is the oldest of four of her siblings. She is the daughter of immigrants who came to the the US from Oaxaca and Guanajuato, Mexico. She attends Woodburn High School at the Academy of International Studies and currently a student of the class of 2021. In her spare time she enjoys getting lost in good books, watching TV shows and watching anime. 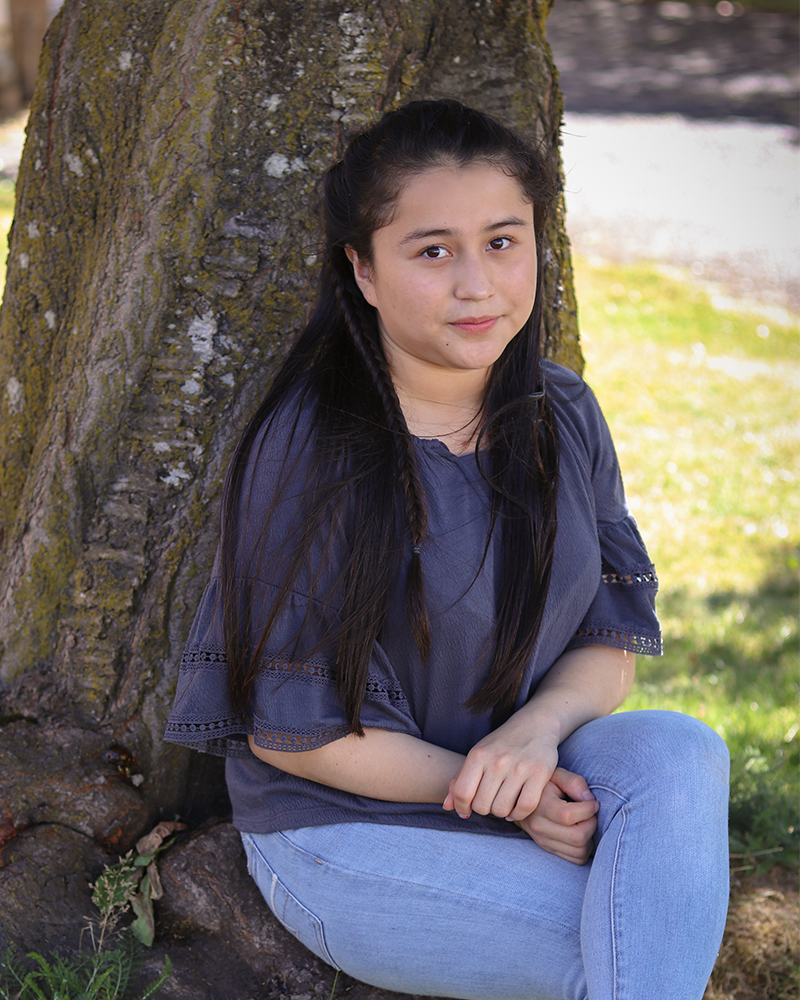 Katherine lives in Woodburn, Oregon and was born in El Salvador. Currently she studies at AIS academy in Woodburn High School, and will enter her junior year. She gives it her best so that her family is proud of her and one day she can help support them in any way she can. As the oldest of her sisters, it is her job to set a good example, and knows that as a young woman, she will have many challenges in life but with support and hard work she will achieve anything she sets her mind to. 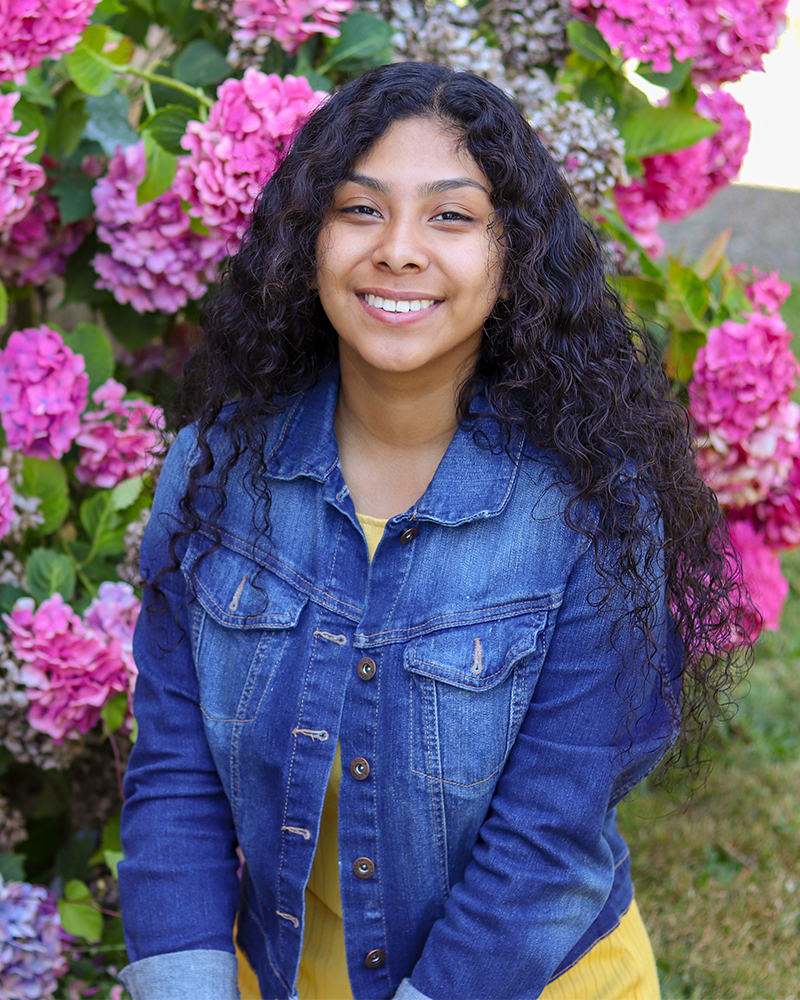 Sara was born in Woodburn, Oregon, and is the second oldest of four sisters, two of which are half sisters. Both her parents are from Leon, Guanajuato and immigrated to Woodburn when they were children. She is currently a Junior at the Academy of International Studies (AIS), one of the four schools within Woodburn High School. She along with a few other high school students is a member of a leadership program called TURNO. On her free days she enjoys reading, watching anime and occasionally does yoga at home.

Lorena Manzo, Chair, representing Causa.  Lorena came into the movement as a member of Mujeres Luchadoras Progresistas in 2003, later become staff. She served as the coordinator of the CAPACES formation process in 2005 before joining the Causa staff in 2006. Lorena has served on several CAPACES committees. Currently she is Causa’s lead organizer.

Brenda D. Mendoza, Secretary, representing Pineros y Campesinos Unidos del Noroeste. Brenda D. Mendoza was born in Guadalajara, Mexico. She is the Vice President of PCUN, Director of its Service Center for Farmworkers and DOJ Partial Accredited Representative. Mrs. Mendoza immigrated to the US undocumented crossing the Tijuana/San Ysidro border in 1987 at the age of 11 and has lived in the US since then. She is married and has two daughters.

Sandra Hernández, Treasurer, representing Latinos Unidos Siempre.  Sandra is a first generation immigrant from Mexico, her family moved to Salem when she was ten years old. Sandra graduated from North Salem High School and later attended Willamette University, becoming the first in her family to graduate and earn a B.A. in Politics. As someone who is very passionate about providing leadership development and positive mentor-ship for youth of color, Sandra has always been inclined to serving youth and their families. She now works as the Director of Latinos Unidos Siempre (L.U.S.), a social justice, Latinx- youth-led organization based in Salem. Through L.U.S., youth are given political, social and cultural education to develop civic engagement and leadership skills. Sandra also serves on the board of Beyond Toxics, an environmental justice organization based in Eugene, Oregon.

Martha Sonato, representing Acción Política PCUNista. Martha is a first generation immigrant from Michoacán, Mexico. In 2000, Martha immigrated to Hood River, Oregon with her family where her parents are currently farmworkers. In 2015, Martha became the first in her family to earn a Bachelor’s degree from Willamette University in Politics, with a minor in environmental science. Since then, Martha has worked in Governor Kate Brown’s office as a policy assistant on housing and human services and as a legislative aide in Senator Sara Gelser’s office. In 2016, Martha joined Accion Politica PCUNista (APP), and led a team of eight young leaders of color in a historic parallel campaign to elect Teresa Alonso Leon to HD 22. In May 2017, Martha led A.P.P in electing three Latinx candidates to the Woodburn School Board, making it the first majority Latinx school board in Oregon. Martha is passionate about developing public and political leadership, equitable policies for underserved communities and eventually also wants to run for public office.

Levi Herrera, representing Mano a Mano Family Center.  Levi graduated from McNary High School and attended Chemeketa Community College and Portland State University. He and his family have lived in Salem since 1992. He currently serves as a member of the Salem-Keizer Budget Committee, the Marion County Public Safety Coordinating Council and the Community Advisory Group to the Equity, Diversity and Inclusion Unit of the Oregon Department of Education. He is a member of the Marion County Children & Families Commission and the Salem Mayor’s International Council. Since 2008, he has served as Executive Director to the Mano a Mano Family Center, an organization dedicated to helping strengthen families, founded in 1988.

Rebeca Velásquez, representing Mujeres Luchadoras Progresistas (MLP).  Leaving behind roots in Michoacan, Mexico and born out of Mexico City, Rebeca arrived in Salem, OR after migrating to US in 1995. She began working as a farmworker and at the local canary. When she became a mother of two she was a stay-at-home mom and began volunteering at the rallies protesting the mushroom farms. At these rallies she met members of MLP in 2004. She became a part of MLP through their wreath making program. In 2006 Rebeca began coordinating MLP and a few years later even got her own radio show on Radio Movimiento. She has had her show every Monday afternoon since 2010. Her third child was born in 2012 and though she stays busy she enjoys participating and collaborating with the sister organizations. Currently she is the Director of MLP.